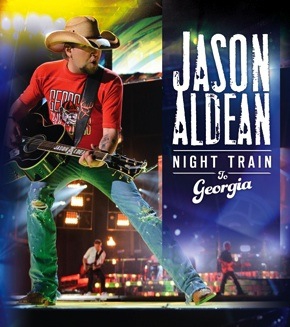 Filmed this past April at the University of Georgia’s Sanford Stadium, the film captures the MULTI-PLATINUM Macon, GA native and a sold out crowd of over 66,000 fans making history with the first concert ever held “between the hedges.” A TackleBox Films production, the piece was produced by Shaun Silva, Ivan Dudensky & Don Lepore.

“That day in Athens will always be one of my proudest accomplishments,” said Aldean. “I’ve been working my whole career to get to this point where I can go into a stadium like Sanford, which I’ve idolized my whole life, and leave a mark. I watch it back now to remember the details because it was all overwhelming and a pretty surreal moment for me.”

Walmart is offering the exclusive reveal of the cover art, also beginning today, on their Twitter page. Fans can visit www.twitter.com/walmart and Re-Tweet to Unlock the DVD cover image.

The high-energy, state of the art show has an 18-song set list that showcases 10 of his No. one songs including “She’s Country,” “Big Green Tractor,” “My Kinda Party” and “Take A Little Ride,” and offers a rare glimpse behind the scenes from the time Aldean and his team begin the planning stages of this show right up to the moment he takes the stage.

Also featured in the 90 minute film are personal interviews from Aldean, footage from his record-breaking Fenway Park and Wrigley Field stadium shows held in Summer 2013 as well as appearances by Kelly Clarkson, Luke Bryan and Ludacris as each of them join Aldean on songs they’ve recorded together.

TRACKLISTING FOR NIGHT TRAIN TO GEORGIA:

CONGRATULATIONS TO THE ALDEAN ARMY MARCH FAN OF THE MONTH

Congrats to the March Aldean Army featured fan contest winner – Justin from Titusville, FL! Read Justin’s fan story and share yours for a chance to win a prize pack and be featured next month.

CONGRATULATIONS TO THE ALDEAN ARMY FEBRUARY FAN OF THE MONTH

Congrats to the February Aldean Army featured fan contest winner – Tobey from Ohatchee, AL! Read Tobey’s fan story and share yours for a chance to win a prize pack and be featured next month.